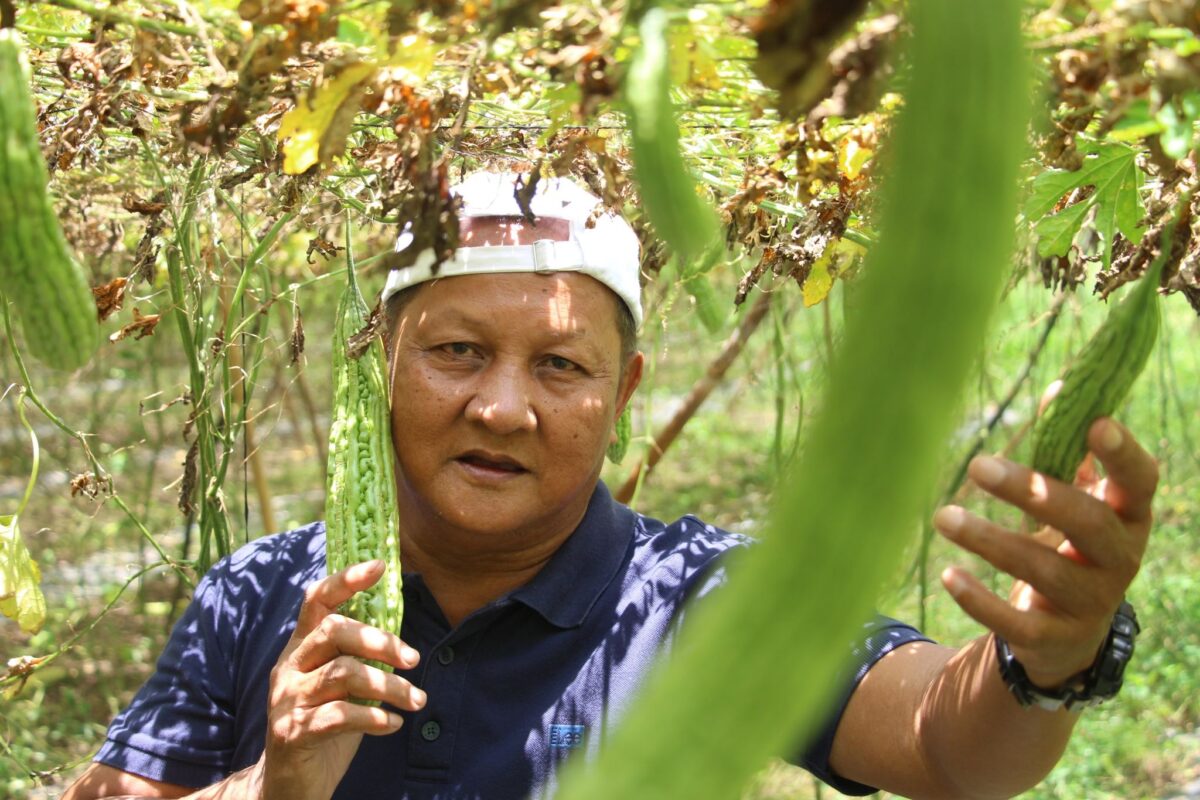 “Dapat unahin si Lord at gagawa ka din, mag-ipon para sa pangarap.” (“God should be first and you should also do your part, save for your dream”)

Among Gutierrez’s fondest childhood memories were tagging along with his parents on their rounds buying and selling bananas. When he himself started his own family, he followed in his parents’ footsteps, buying and selling fruits and vegetables. Once during a conversation about ampalaya (bitter gourd) farmer-vendor, he learned that the vegetable was a high-yielding crop that is in demand all year round. Tatay Nebu decided to partner him, providing additional farming tools and a can of seeds.

They sold their first harvest at P70 a kilo, with a P30, 000 net profit. Soon other small merchant were buying from Tatay Nebu, so he rented three hectares of land to be able to meet the demand. He now plants 45 cans of seeds and his buyers deliver produce to various markets in San Pablo, Laguna; Cavite; and in Divisoria, Balintawak, and Pasig in Metro Manila. His amplaya farm averages P1.5 million in annual sales and almost P800, 000 annual profit. He sets aside 30% of his earnings to buy additional farmland and a jeep for deliveries.

Tatay Nebu also ventured into hog raising with a P5, 000 loan from TSPI. With his good repayment record and an expanding business, he was recommended for a higher loan, moving up from group lending to individual lending.

It has been almost three years since he started ampalaya farming, and he has not suffered any losses, whether from pest attack or theft. Whatever he does, Tatay Nebu puts God first.

He is grateful to have found a trustworthy business partner with whom he splits profits equally. His partner has a purchased vehicle, made home improvement and opened a sari-sari store. Similarly, Tatay Nebu is generous to his workers (two to eight, depending on the season), giving those bonuses when harvest and sales are good. Some of them now have their own businesses. Treating people right is good management practice; it motivates them, he says. He also looks after their spiritual well-being by sharing the Word of God with them.

A Sunday school teacher in his youth, Tatay Nebu, along with his family, serves the Lord through various ministries. He has four children, three of whom are based abroad, in New Zealand, Taiwan and Hong Kong. Their youngest, 31, lives here. When his two sons come home for good, he will train them to take on their businesses.

An upright citizen, he has been asked to run in the barangay elections, but he is not interested. He is active in a cooperative formed by Golden harvest Farmers organization, of which he is a former board member. Ha also a former Vice Chairman of MANAH (Manggagawa ng Hasyenda Maloles), through which 203 hectares of land covered by the Comprehensive Agrarian Reform Program were awarded to farmers, including the 2.6 hectares he now owns.

This website uses cookies to improve your experience while you navigate through the website. Out of these, the cookies that are categorized as necessary are stored on your browser as they are essential for the working of basic functionalities of the website. We also use third-party cookies that help us analyze and understand how you use this website. These cookies will be stored in your browser only with your consent. You also have the option to opt-out of these cookies. But opting out of some of these cookies may affect your browsing experience.
Necessary Always Enabled

Performance cookies are used to understand and analyze the key performance indexes of the website which helps in delivering a better user experience for the visitors.

Analytical cookies are used to understand how visitors interact with the website. These cookies help provide information on metrics the number of visitors, bounce rate, traffic source, etc.

Advertisement cookies are used to provide visitors with relevant ads and marketing campaigns. These cookies track visitors across websites and collect information to provide customized ads.

Other uncategorized cookies are those that are being analyzed and have not been classified into a category as yet.